You are here: Home / zzHomePageLayout / • / Letter from Paul Jeffrey

Many times I cover emergencies in places where I never have the opportunity to return. Yet I just finished a four-week trip to Asia where I returned to two different places I had covered in the past.

In Indonesia, I prepared material for the tenth anniversary of the 2004 tsunami. One of the most rewarding visits was to the remote island of Nias, where, for example, in 2007 I photographed a 5-year old boy, Jefrin Zendrato, planting mangroves with his father and brother.  The mangroves would supposedly provide a bit more protection to their section of seashore while also helping the ecosystem near their small fishing village. They got help from a church-sponsored agency that provided the mangrove seedlings, and which also helped them build new houses.

The next image is from this year. Jefrin is now 12. As you can see, he has grown quite a bit. And you could say the same thing for the mangroves. Which, by the way, are helping local fish stocks to replenish themselves. Sometimes this relief work really makes a difference. 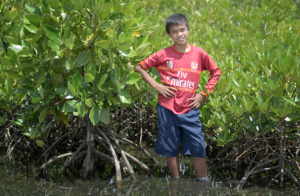 I also did a week-long photography workshop in the Philippines, working out of Tacloban, the city that was ground zero for the massive destruction of Typhoon Haiyan last year. My students used the community-based reconstruction work as raw material for their homework.

I had the privilege to be in Tacloban on the one-year anniversary of the deadly typhoon. I had been there earlier this year, covering the relief phase, but the anniversary was a particularly painful day. I spent part of the day at a mass grave interviewing survivors as they came to grieve the loss of their loved ones. As always in the Philippines I was struck by the resilient spirit of the survivors, many of whom are involved in advocacy both to make their government more responsive to the needs of affected communities, as well as to challenge world leaders to take more seriously the increasing threat of climate change to poor coastal communities. 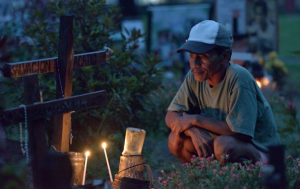 Both in Indonesia and the Philippines, ACT Alliance agencies are involved in myriad activities, from building shelter and water systems to rebuilding livelihoods and community organization. But at the end of the day, what we do is simply accompany the survivors as they put their lives back together–at the pace and in the manner they choose. We simply stand beside them, in grief and in rebirth. 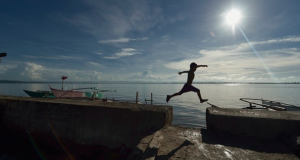 Thanks for your prayer and support for my work, and your enthusiasm for ministries of hopeful presence in all forms, from your neighborhood to tiny islands in Indonesia. May our accompaniment open doors to God’s healing and justice.