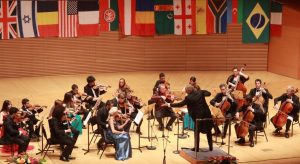 The orchestra iPalpiti (ee-PAHL-pit-ee, Italian for “heartbeats”) is unique in the world in that it draws its members from top prize-winning laureates of international competitions. iPalpiti has played to great acclaim in leading concert halls around the world. Approximately 30 artists will arrive in Los Angeles from over 20 countries for the annual iPalpiti Festival of International Laureates. Concerts take place at various venues throughout the Southland July 7–24 and culminate in an evening concert by the full orchestra in the Walt Disney Concert Hall. This concert at Rolling Hills United Methodist Church previews chamber music and orchestral selections from the Festival.

Donations appreciated — 100% for the artists